Doors of Sleep popped up at the perfect time on Netgalley. I wanted a Sci-fi, but none of the books in my collection were calling my name. This one called to me instantly, I loved the cover and the premise was super intriguing. 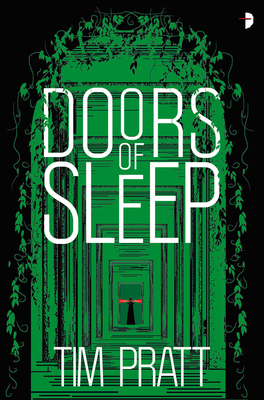 Synopsis – Every time Zax Delatree falls asleep, he travels to a new reality. He has no control over his destination and never knows what he will see when he opens his eyes. Sometimes he wakes up in technological utopias, and other times in the bombed-out ruins of collapsed civilizations. All he has to live by are his wits and the small aides he has picked up along the way – technological advantages from techno-utopias, sedatives to escape dangerous worlds, and stimulants to extend his stay in pleasant ones.

Thankfully, Zax isn’t always alone. He can take people with him, if they’re unconscious in his arms when he falls asleep. But someone unwelcome is on his tail, and they are after something that Zax cannot spare – the blood running through his veins, the power to travel through worlds…

You can see why I had to have it right, how cool does it sound? And that is where my love affair with the book ended. It’s not terrible, it’s not great, it’s pretty meh. I know I sound like an asshole, but the book was totally lacking excitement, suspense, thrills. For a book that should have you a little on the edge of your seat, I just didn’t care. The book was written in such a way that all of the problems Zax faced were easily solved.

Minna was a cool character, so cool in fact, she could fix basically everything. Zax gets his arm chopped off, she grows him a new one. He needs to stay awake longer, she alters his brain. Need to set a trap or two, she can do it. Get trapped on a space station, she can alter her own blood to give herself Zax’s powers. There is never any real danger.

And the villain in this whole piece? He feels like a caricature of a bad guy from Captain Underpants.

Another reason I think I had such a hard time getting into this is because time just flits by. 6 months can be jumped in a page. Also because so much happens off page, we are told about it in massive monologues. After the second time this happened I could feel my brain starting to check out and to be honest I’m surprised I finished it.

I was really bummed about this one. The idea was pretty cool, very Sliders, but the execution didn’t work for me at all. I needed the stakes to be higher, I needed some tension and I needed to want the characters to survive.

One thought on “Doors of Sleep: Journals of Zaxony Delatree by Tim Pratt”