This is the prelude novella to the Existence series, book 1 will be released later this month. I thought it was really cool that the author gives us this story first. Often when a prelude is written later into a series it feels like it’s trying to fill the gaps. Remember is a complete story on it’s own. It gives you hints as to what will come but it seems like there are so many ways in which the world is about to go to shit that you just don’t quite know what way the author will choose. 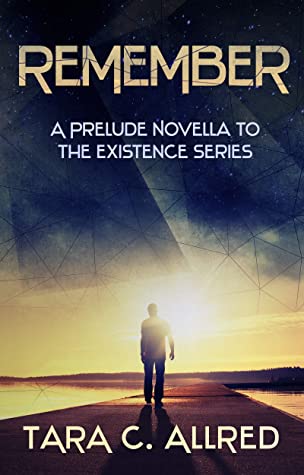 Synopsis – One invention and two men hoping to change the way humans connect—through memory exchanges—but days before it’s released, one man realizes it may do more harm than good.
Foster Grady pleads with doctors to give his dying wife a moment of reprieve. He wants her to experience his creation: the ability to relive their life together through his memories. But when doctors refuse, terminal patient, Ashyr Harmon, convinces Foster to give him the chance instead.
The exchange becomes Ashyr’s lifeline and the two form a friendship and business deal which ignites dangerous consequences.
REMEMBER is the origin story of the invention Em-Path and the dynamics of those involved with its creation. This story can be read first and adds to the overall interest and complexity of The Existence Series.

This is a really tough book to review. It’s well written, interesting and while it sets up the Existence series well, it is it’s own complete story. Foster is an incredibly focused character, he is so determined to bring his creation to life that he misses out on the life going on around him, which made him frustrating. He is very smart, but so naïve in ways, that it leads to a whole heap of trouble.

I think that often in books the technology has already been invented and we wonder what the hell they were thinking. Here we are shown a chunk of the process and how different the intended use was from how it ended up. It seems like once money becomes involved all good intentions go out the window.

Overall  Remember is a great little set up for the main series.

One thought on “Remember by Tara C. Allred”