Hi, Hello, Welcome to my little neck of the woods for the latest blog tour by The Write Reads On Tour, featuring a look at Vultures by Luke Tarzian. 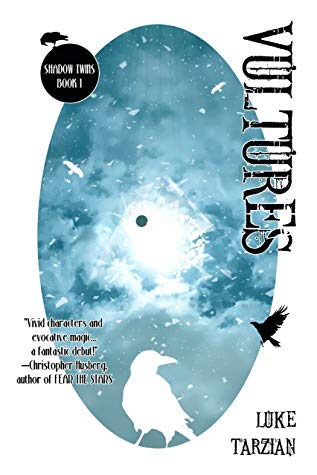 Synopsis – An enemy slain is not a conflict won…

After decades of war the demon Te Mirkvahíl is dead. But its progeny endure, spilling from the Heart of Mirkúr, sowing death across the land of Ariath. If the people are to finally know peace, the Heart must be destroyed. Theailys An believes he can do just that with The Keepers’ Wrath, an infamous power focus wrought in Ariath’s yesteryears–but the weapon first must be reforged.

War spares no one…

Serece never intended to get involved in Ariath’s war. But history and demons have a way of pulling strings. When she learns Theailys An, a man whom she abhors, bears striking similarity to the first creator of The Keepers’ Wrath, Serece departs her mountain world for Ariath to ascertain the truth.

For millennia Behtréal has walked the world alone. Rewriting history to resurrect his people is easier said than done. But Ariath holds the key–soon The Keepers’ Wrath will be remade.

As paths converge and a shadow falls across Ariath, one thing becomes increasingly and horrifyingly clear–these events have played out many times before.

“Feels like a dark fantasy version of a David Lynch movie…an engaging and thought-provoking read.”
—Nick Borrelli, OUT OF THIS WORLD SFF REVIEWS

“One of the most stunning debuts I’ve ever read.”
—Justine Bergman, WHISPERS & WONDER

About the author – Fantasy Author. Long Doggo Enthusiast. Snoot Booper. Shouter of Profanities. Drinker of Whiskey. These are all titles. I’m the Khaleesi nobody wanted and the one they certainly didn’t deserve, but here we are.