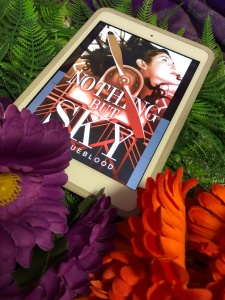 This book introduces us to the fierce wing walker Grace. She is feisty, loyal, and she just happens to be one member of The Soaring Eagles. They are a close-knit group, a family, one that Grace holds dear.
Grace arrived on her uncles doorstep after the death of her parents and sister at 13. By 14 she was walking on the wing of her uncle’s jenny. Now the team are working to get themselves to the World Aviation Expo, where they could win a Hollywood contract. Desperate to keep her new family together, Grace pins all her hopes on it. But when mechanical failure means they may not get there, will Grace make a deal with her enemy to get them to the expo.

Synopsis – Grace Lafferty only feels alive when she’s dangling 500 feet above ground. As a post-World War I wing walker, Grace is determined to get to the World Aviation Expo, proving her team’s worth against flashier competitors and earning a coveted Hollywood contract. No one’s ever questioned Grace’s ambition until Henry Patton, a mechanic with plenty of scars from the battlefield, joins her barnstorming team. With each new death-defying trick, Henry pushes Grace to consider her reasons for being a daredevil. Annoyed with Henry’s constant interference, and her growing attraction to him, Grace continues to test the powers of the sky. After one of her risky maneuvers saves a pilot’s life, a Hollywood studio offers Grace a chance to perform at the Expo. She jumps at the opportunity to secure her future. But when a stunt goes wrong, Grace must decide whether Henry, and her life, are worth risking for one final trick. – Goodreads

Grace was a wonderful character, the writing brought her to life, the tension was real as she was climbing from a speeding car to a moving plane. I was on the edge of my seat. I had no prior knowledge of wing walkers and barnstorming, it was wonderful to read about the towns, the people and life in general.

‘With the ladder still spinning like a whirlwind, I swung my legs back. My hand slid farther down the rung. The air current pulled me back then shot me forward. I caught the bar just as my other hand slipped away. Hanging by one arm again, I gasped for my last bit of strength. Thick, black exhaust flooded my lungs. I shoved down the fear filling my chest, not wanting to think about what would happen if i couldn’t hold on.’

Set after WW1, the expectations on women were that they would get married, have babies and be happy with this, the idea that they would want something different was off-putting to a lot of the characters, so Grace is treated as an oddity. They are amazed by what she does, but they don’t think a womans place is in the sky. I enjoyed watching her push back against societies expectations.
All in all a solid read, that makes me think I should pick up historical fiction more often. I will also be picking up a copy for my daughter.

I received this from the publisher via NetGalley, in exchange for an honest review.

Get your own copy – Amazon / Book Depository