A few of my favourites

I have a thing for urban fantasy and paranormal romance. It’s one of my favourite ways to spend a couple of hours, totally wrapped up in magic and if I’m super lucky, broody, sexy, possessive alpha males. Also vampires and werewolves are totally my thing. So I thought I would list a couple of my favourite UF and PNR series.

Synopsis: Mercedes Thompson, aka Mercy, is a talented Volkswagen mechanic living in the Tri-Cities area of Washington. She also happens to be a walker, a magical being with the power to shift into a coyote at will. Mercy’s next-door neighbor is a werewolf. Her former boss is a gremlin. And she’s fixing a bus for a vampire. This is the world of Mercy Thompson, one that looks a lot like ours but is populated by those things that go bump in the night. And Mercy’s connection to those things is about to get her into some serious hot water.

Please, don’t let the cover fool you. Mercy wears clothes. This series was one of my first forays into adult urban fantasy, and it was such a breath of fresh air. I immediately loved it and am collecting the entire series. It’s a long series, it just hit book 10 and 11 is due out next year. This world has so much in it, humans, shifters, fae, vampires. The Fae have announced themselves, the shifters are thinking about coming out of the shadows and everyone is trying to find their place. Each book is great on its own, but the overall story arc is fantastic. I love the characters; I love that Mercy isn’t a special snowflake, she has small amounts of martial arts training, she is smart and the most loyal person you could ever want on your team. Book 3 – Iron Kissed, is the most intense book in the series, and I was a sobbing mess. I think this is where Patricia Briggs really stepped up her game. I think the way she dealt with the aftermath of events was brilliant, she really made you empathise with Mercy.

This is such a solid series, that stands up just as well on reread. So much so, I reread it every two years or so.

Synopsis: Anna never knew werewolves existed, until the night she survived a violent attack… and became one herself. After three years at the bottom of the pack, she’d learned to keep her head down and never, ever trust dominant males. Then Charles Cornick, the enforcer—and son—of the leader of the North American werewolves, came into her life. Charles insists that not only is Anna his mate, but she is also a rare and valued Omega wolf. And it is Anna’s inner strength and calming presence that will prove invaluable as she and Charles go on the hunt in search of a rogue werewolf—a creature bound in magic so dark that it could threaten all of the pack.

This is a spin-off series, in the Mercyverse. There is a prequel called Alpha & Omega that you really should read before this one. I haven’t caught up in this series yet, but it starts out really strong, and the actions in this series affect those in the Mercy series. 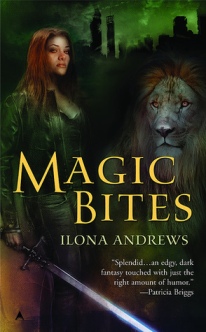 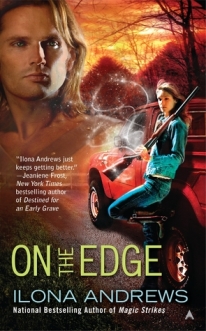 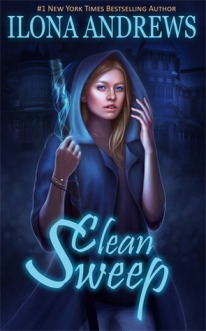 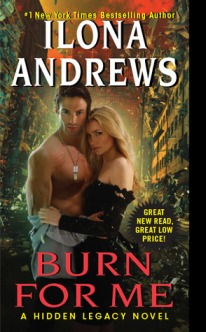 Ilona Andrews are a formidable writing team. I haven’t finished all of their series but I have enjoyed everything I have read so far. They are all quite different, but the one thing they have in common is kick ass, brave, loyal female characters. Also if you are delving in, don’t forget to grab the novellas along the way. They add so much to the main books.

Synopsis – Atlanta would be a nice place to live, if it weren’t for the magic… When the magic is up, rogue mages cast their spells and monsters appear, while guns refuse to fire and cars fail to start. But then technology returns, and the magic recedes as unpredictably as it arose, leaving all kinds of paranormal problems in its wake. Kate Daniels is a down-on-her-luck mercenary who makes her living cleaning up these magical problems. But when Kate’s guardian is murdered, her quest for justice draws her into a power struggle between two strong factions within Atlanta’s magic circles. The Masters of the Dead, necromancers who can control vampires, and the Pack, a paramilitary clan of shapechangers, blame each other for a series of bizarre killings—and the death of Kate’s guardian may be part of the same mystery. Pressured by both sides to find the killer, Kate realizes she’s way out of her league—but she wouldn’t have it any other way

The Kate Daniels series was my first foray into their work and while it is still one of my favourite worlds and I thought Kate was great, I didn’t love the book. I liked it, but I had seen so many rave reviews that I was a little disappointed. But by book 3 I was sold, this was when it really got going. Again, I reread this series every 1-2 years. I had a similar experience with The Edge series, I didn’t love book one, but adored the second. Their side characters are one of the really strong aspects of their writing, and there is something strangely addictive about their writing, I struggle to put them down and when I do I’m thinking about them and what may or may not happen to all of these wonderful characters.

The series in order of my favourites are 1. Kate Daniels 2. Innkeeper Chronicles 3. The Edge 4. Hidden Legacy. Also the Alphas prequel is brilliant and I’m really hoping we get more from that series.

Synopsis: Half-vampire Catherine Crawfield is going after the undead with a vengeance, hoping that one of these deadbeats is her father – the one responsible for ruining her mother’s life. Then she’s captured by Bones, a vampire bounty hunter, and is forced into an unholy partnership.
In exchange for finding her father, Cat agrees to train with the sexy night stalker until her battle reflexes are as sharp as his fangs. She’s amazed she doesn’t end up as his dinner – are there actually good vampires? Pretty soon Bones will have her convinced that being half-dead doesn’t have to be all bad. But before she can enjoy her newfound status as kick-ass demon hunter, Cat and Bones are pursued by a group of killers. Now Cat will have to choose a side . . . and Bones is turning out to be as tempting as any man with a heartbeat.

This series!!! It is fucking brilliant. I loved it when I first read it and I love it now. Bones is in my book boyfriend harem. He is a delight. This is a series that sucks you in and next thing you know you are on the last book and its all done. Insert slump. The series is complete and there are a couple of spinoff series as well.

Synopsis: They killed me. They healed me. They changed me. Sure, the life of a graduate student wasn’t exactly glamorous, but I was doing fine until Chicago’s vampires announced their existence to the world. When a rogue vampire attacked me, I was lucky he only got a sip. Another bloodsucker scared him off and decided the best way to save my life was to make me the walking undead. Now I’ve traded sweating over my thesis for learning to fit in at a Hyde Park mansion full of vamps loyal to Ethan “Lord o’ the Manor” Sullivan. Of course, as a tall, green-eyed, four-hundred-year-old vampire, he has centuries’ worth of charm, but unfortunately he expects my gratitude—and servitude. Right… But someone’s out to get me. Is it the rogue vampire who bit me? A vamp from a rival House? An angry mob bearing torches? My initiation into Chicago’s nightlife may be the first skirmish in a war—and there will be blood.

I’ve read up to book 8 in this series and while I didn’t think it was perfect, its full of cheesy goodness and a little addictive. Well worth a look, it has all the classics, vampires, werewolves, fae.

The Fae Chronicles by Amelia Hutchins

Synopsis: Have you ever heard of the old Celtic legends of the Fae—beautiful, magical, and deadly creatures that have a love of messing with humans just for kicks and giggles? Welcome to my world. What started out as a strange assignment, lead to one of the most gruesome murder mysteries of our times. My friends and I are set and determined to find out who is killing off Fae and Witches alike. Couple of problems in the way – I hate the Fae and the Prince of the Dark Fae is bound and determined that I work for him. He’s a rude, overbearing egotistical ass with a compulsive need to possess, dominate and control me. Oh—did I mention that he is absolutely sex-on-a-stick gorgeous and he makes me feel things that I never ever wanted to feel for a Fae… every time he touches me or looks at me with those dangerous golden eyes he seems to pull me further in under his spell, despite my better judgment. My friends and I can’t trust anyone and nothing is as it seems on the surface—not even me.

I feel like I just need to put it out there, I hate it when rape is used as a threat. It happens in this book, so it’s definitely not for everyone. I read this a long time ago and while I wasn’t swept completely away by book one, I had already purchased the next book and I liked it enough to continue and then I was well and truly into the books. This definitely leans towards erotica, but it was really good. I liked the worlds, the magic and mythology, the cover is sexy as hell and it was such a compelling, easy read. Well worth a look if you like your pnr with a bit more sex.

And that is a list of some of my favourite and most memorable urban fantasy and pnr. Honourable mentions go to the Black Dagger Brotherhood series by J.R Ward (so much sexy times), Women of the underworld series by Kelley Armstrong and the Psy Changeling series by Nalini Singh.

Do you have any recommendations for me?