I received this from the publisher via NetGalley in return for an honest review.

Innis Lear is a place of deep magic. The blood of the island runs into the holy wells, people communicate with the trees and earth. That is until King Lear caps the wells in his heartbreak. Busy focusing on the stars he forbids the people of his island, from worshipping the land and trees. Some forget the language of the trees, some still practice in secret and others learn the language of the stars, like the obsessed King wants. King Lear’s oldest daughter Gaela has a clear plan for the future of Innis Lear and it involves her being on the throne. Regan the middle daughter has her own ambitions, and the youngest Elia wants to watch the stars and care for her father. All of these ambitions are thrown up in the air once King Lear decides it’s time for him to place his daughters in their rightful place. Everything changes in one afternoon. 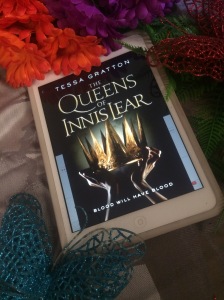 The island is raw and steeped in her rage, making the people who grow there strong, and sharp, and ever quick to fight. Mountains claw upward in the north, and a black river gushes south and west, spreading fingers east into smaller streams that trip through the center of the island. The rush of water gathers up all the trees and flowers, giving them the blood to grow wild and tall, feeding the roots until they dig through the rock itself.

The writing; it instantly transported me to this world. The vivid descriptions, the rich beauty, it all popped off the page. It reminded me of a fairytale, with the way it flowed and painted a picture.

I did only receive an excerpt, so I only know about a small part of the book. I will 100% be ordering this when it’s released so I can give it a proper review. This is a character driven read, with multiple points of view. We have King Lear’s three daughters Gaela, Regan, and Elia, Ban the Fox of Aremoria and several others. Each character has a unique voice, they don’t blend at all, and the gradual introduction really builds up the suspense over what is eventually going to happen. I don’t want to say too much, I don’t want to give anything away so I’m going to wrap this up really quickly. Lear’s daughters are three incredibly different women, but they are all made of steel, it’s just that each carries their strengths in a different way. We have family drama, political intrigue and magic in this bold fantasy tale. This really has the makings of a wonderful book and I’m looking forward to getting my hands on the rest of the story.

The Queens of Innis Lear by Tessa Gratton will be released on the 27th March from Tor.  You can get it from Amazon, Book Depository or Booktopia.

3 thoughts on “The Queens of Innis Lear by Tessa Gratton”